Schools and Their Communities: Civic Leadership Rooted in Action 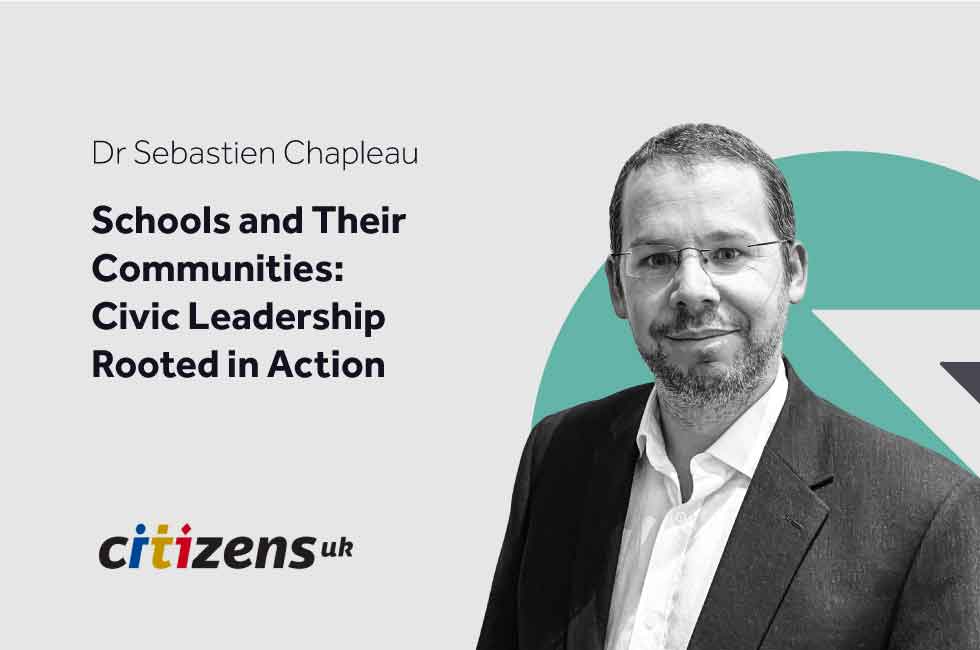 As we move into the second year of our work at the Foundation for Education Development (FED) and following the launch of the FED National Education Consultation Report, we hosted a series of roundtable discussions seeking to answer the theme ‘Whatever Happened to… Citizenship and Community Engagement’.

We asked Dr Sebastien Chapleau, Executive Headteacher at Gesher School and Lead Organiser at Citizens UK, to share his input in this roundtable discussion. In this powerful thinkpiece, Sebastien talks about anchor institutions rooted in communities, rebalancing power and addressing community needs, whilst highlighting ‘the way schools can support their families and neighbours beyond the school gates is something which can spread like a match on dry grass and inspire a whole sector’.

Schools and Their Communities: Civic Leadership Rooted in Action

Needless to say, I still think this to be the case. But what the crisis has proven to me is that the way schools can support their families and neighbours beyond the school gates is something which can spread like a match on dry grass and inspire a whole sector.

Schools, as anchor institutions whose long-term sustainability is tied to the wellbeing of the children in their care, can be very powerful institutions which can influence the lives of not only children, but also their families.

What we have seen, going through this whirlwind of a crisis, is a sector – often irrespective of pedagogical ‘affiliation’ – willing to address, more holistically, the many needs children and families face outside of school. Most importantly, schools have risen to the challenge of shifting the balance of power, beginning to push back against those in the system who, for too long, have held us in their grip. By embracing the necessity of truly engaging with the lives of families in their homes, across our neighbourhoods, schools have been redefining what their purpose is.

This realisation from our sector – one that has been uniting leaders in numbers we’d not seen before – is rooted in knowing how best to support our communities: it is one that is rooted in a first-hand understanding of what goes on in the real world. It is not rooted in ivory towers full of those whose understanding of school life is more than often abstract.

It feels like there was a time when most DfE missives ending up in our mailboxes would be received with sighs of dismay. But now, what has grown across our profession is an appetite for a different kind of relationship with those who make decisions in Whitehall, on ‘our behalf’. It is an appetite born out of frustration – a realisation that it is we who know best. It is also an appetite borne out of compassion and hope, a desire for action uniting school leaders to focus their efforts on building a system which isn’t disconnected from reality. That is why, along with many others, fought so hard for families to get the free school meal vouchers they so desperately needed and is also why I have helped the push to bridge the digital divide among pupils.

My hope is that this ‘new-found’ appetite for the balance of power to be readdressed will lead to school leaders thinking strategically about the collective strength we have, locally and nationally, to take action on the multitude of issues making our children’s lives – and the lives of their families – often unnecessarily difficult. And this, not as an add-on but, rather, as an integral part of school culture and the way we design our curricula. In the same way as many make academic achievement a key metric when it comes to defining a school’s success, an impact on families and our community at large should be things we clearly plan for.

Over the past few years, I have been lucky enough to witness what school communities can achieve when they take action to address the needs of their families beyond the school gates. Schools working closely with their families and neighbours, when organised in ways that aim to challenge the status quo, can, for instance, address the many issues which we know affect the wellbeing and, ultimately, future success of our children.

Leaders at Surrey Square Primary, in Southwark, for instance, know that current governmental policies in terms of immigration have a detrimental impact on families and, as Fiona Carrick-Davies and Matt Morden explain here, the school and neighbouring institutions can work together to try and influence the Home Office.

Reach Academy, and its sister organisation Reach Children’s Hub, in Feltham, as Luke Billingham explains here, are building a ‘cradle-to-career pipeline’ to ensure that children and their families are systemically supported from pre-birth, through the school system, and beyond. Whilst many might argue that this kind of work as something which the State should provide, leaders at Reach are pragmatic in their approach and they step in in the absence of adequate local services.

As Martin Luther King Jr. encouraged us to act, in his A Gift of Love, let’s remember that ‘[o]ne of the great tragedies in life is that men [sic] seldom bridge the gulf between practice and profession, between doing and saying. A persistent schizophrenia leaves so many of us tragically divided against ourselves.’ With a sector having re-discovered a hunger for political action, I believe that this kind of work by schools and their communities could become more of a norm after lockdown, and not just rare examples. The true success of our communities depends on it.