The climate for innovation in UK schools 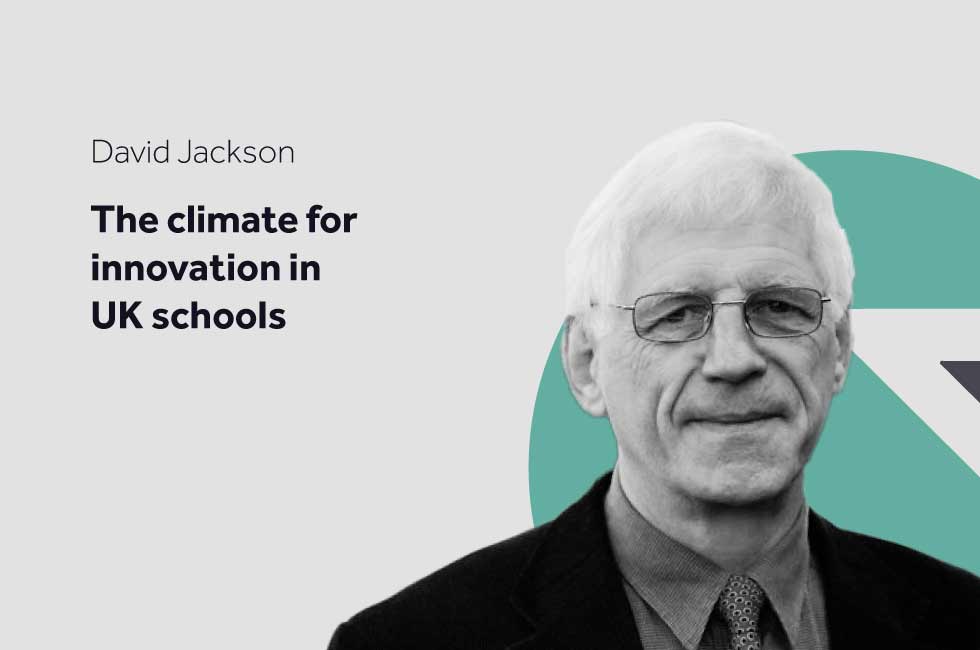 As we move into the second year of our work at the Foundation for Education Development (FED) and following the launch of the FED National Education Consultation Report, we hosted a roundtable discussion focussed on ‘Innovation or ‘initiative-itis’: How can we move from initiatives to long term innovation in education?’

We asked David Jackson, Senior Associate at the Innovation Unit, to share his insights following his contribution to the roundtable discussion. David suggests that ‘Innovation is the radical edge of learning and for most fields it is an intentional activity – strategically, practically and politically. Not, though, in the UK’s education system.’

The climate for innovation in UK schools

Innovation is a difficult concept to define.  However, if we think of it as making new approaches happen in practice, then its crucial role is obvious in helping systems and organisations achieve breakthrough learning – in medicine, technology, transport, healthcare, engineering, whatever.  Innovation is the radical edge of learning and for most fields it is an intentional activity – strategically, practically and politically.  Not, though, in the UK’s education system.

A decade ago, I had the privilege to support the design and implementation of New York’s  iZone360 initiative.  Basically, the then Chancellor, Joel Klein, created a supported and controlled space for 50 NY schools to reimagine models of schooling and learning – to create new school designs.  They were each supported by a design partner (such as Big Picture Learning or Apple or Google) and resourced, deregulated, supported by coaches and facilitated as a community of innovators.

Two more things.  One was that they were also explicitly innovating ‘on behalf of the system’, to advance the educational mission.  The other was that, at the launch, Joel Klein not only liberated them to be radical and bold, but also promised them “I have your backs”.

Compare that with the barriers and disincentives to innovation in UK schools faced with prescription, policy constraints, regulation, attendance checks, content requirements, testing regimes – even orthodoxy in building design.   And, in addition, there is Ofsted, whose framework prescribes what schooling and learning should be.  Some of the most interesting schools in the world (take High Tech High, or Big Picture Learning or Expeditionary Learning models) would probably not satisfy Ofsted’s framework.  In the UK innovation is high risk.

And here’s the rub.  We didn’t always believe it, but we now know that all young people can be effective learners and can achieve.  We know this, and also that they learn and achieve differently.  Even more, there are school designs and practices around the world that demonstrably achieve this.  In fact, it is pretty much evident that there is only one model of school that can’t achieve it, that has had more than a hundred years to test out its capacity to support all students to success and has failed.  That’s the schooling model that we have.

This is why educational innovation is so important – so that the system can learn its way forward, rather than recycling components of a model that has a history of failing too many children and isn’t fit for purpose for the future.  The Free School strategy offered an opportunity to do exactly what was done in New York – to invite a proportion of this cohort of new schools to create radically different school designs and to do so on behalf of the system – and then to harvest the learning on behalf of all children.  If only!